Have you ever heard of Stendhal Syndrome?

It’s a psychosomatic condition that can happen while visiting a museum or a city full of art just like Florence.

Be aware of rapid heartbeat, dizziness, fainting, confusion, or even hallucinations, everyone can experience this syndrome!

However, Italians seem to be almost immune to it because beauty and art surround most of their everyday life.

Where does it originate? 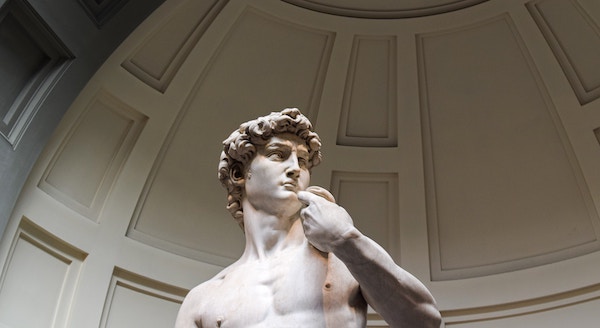 Stendhal Syndrome is named after Marie-Henri Beyle, whose pseudonym is Stendhal. He was a 19th-century French author who described his experience with Stendhal Syndrome in the book “Rome, Naples, and Florence”.

In 1817 he visited the Basilica of Santa Croce in Florence and he felt in awe by the magnificent beauty of it but also physically sick. He was shocked by his unexpected and accidental reaction!

Read the original transcript from the book:

“I was in a sort of ecstasy, from the idea of being in Florence, close to the great men whose tombs I had seen. Absorbed in the contemplation of sublime beauty … I reached the point where one encounters celestial sensations… Everything spoke so vividly to my soul. Ah, if I could only forget. I had palpitations of the heart, what in Berlin they call ‘nerves’. Life was drained from me. I walked with the fear of falling.”

But what does science say?

In 1979 the psychiatrist Dr. Graziella Magherini of Santa Maria Nuova Hospital studied over 100 cases of people who had been hospitalized following a day browsing the streets or the museums of Florence.

She named the condition “Stendhal Syndrome”  in honor of the writer and published a book about it, but many doctors still disagree with her and are skeptical about the real existence of this “temporary illness“.

Even nowadays we have had a few cases, you can read more about them here or here (in Italian).

Dario Argento, the famous Italian horror movie director, released “La Sindrome di Stendhal” in 1996. The protagonist is a policewoman who is searching for a serial killer but unfortunately, she is kidnapped as well by him while experiencing Stendhal Syndrome at the Uffizi Gallery. The movie has been inspired by a real-life Stendhal Syndrome fact experienced by the director himself during a visit to the Parthenon, in Athens.

Even in literature, we find a mention of Stendhal Syndrome: “A Room with a View“, written in 1908  by the writer E.M. Forster,
has a scene set in Piazza Della Signoria where Lucy, the protagonist, witnessed two Italian men arguing. The emotions given by the location and the situation make the woman faint. She is a Stendhal Syndrome victim too.

What about you? Have you ever experienced something similar?

Let us know on our social media accounts!