Development of the language from its origins

The Italian language has developed through a long and gradual process, which began after the Fall of the Roman Empire in the 5th century.

Up until this moment, Latin had spread and had been imposed across the Empire as the ‘madre franca’, or the shared language.

After the fall of the Empire, vernacular and local forms of the language had an important role in society and the everyday life of the population.

However, for several centuries, and especially during the Middle Ages, Latin was the dominant cultural language, used throughout European Universities and in all the official acts and procedures of the Church.

The first documents written in vernacular (which was the language usually spoken by the general population) date back to 960.

These are the so-called Placiti Cassinesi, which prove that some territories located near the city of Capua, in Campania, belonged to a monastery of Benedictine monks.

From the start of the 13th century large amounts of literature, and especially poems, began to be published in regional Italian. The largest push and most significant contributions were made by Sicilian Poets in the 13th century who were then followed by those from Tuscany, the most important being Dante Alighieri, Giovanni Boccaccio, and Francesco Petrarch. 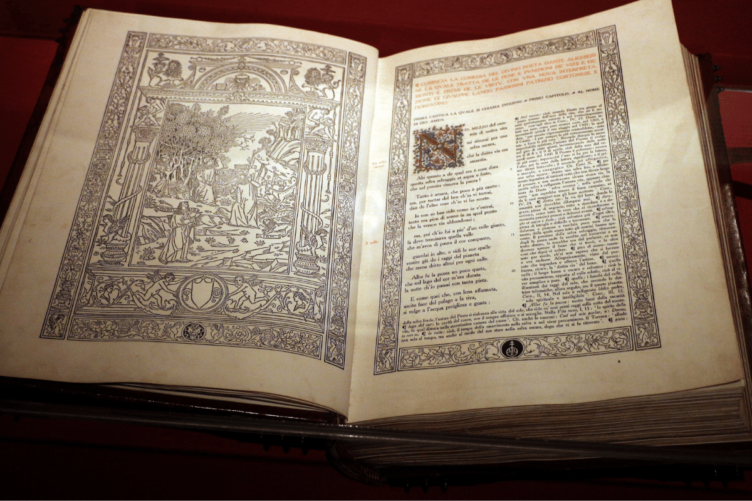 The foundations of modern Italian

From a historical perspective, it is not wrong to claim that the high, or cultured, Tuscan dialect, which the three most important poets of the 1300s (Alighieri, Boccaccio, and Petrarch) wrote in can be considered the basis of modern Italian.

Yet despite this, the Italian language as we know it today is the result of a long process of evolution and debates, which began in the 1600s, over what the correct form of the language should be. At the end, the question of what Italian to speak remained. Even though at the end of the 1900s many writers and cultural figures were being inspired by the Tuscan model, in every aspect of the language, there are several relevant historical and social factors that need to be considered.

Firstly, for centuries up until the Unification of Italy in 1861, the country was divided into a number of different states, which were usually under foreign rule. When Italy was united in 1861 the decision was taken to make Tuscan the official language of the country.

Within the Italian population, however, there were and always had been high rates of illiteracy, and this illiteracy continued predominantly in rural regions until the 1950s.

As a result, dialects were used as the everyday language for centuries, and anyone who was able to express themselves and communicate in Italian did so using grammatical, lexical and phonetical aspects influenced by regional and local dialects.

Use of dialects in Italy

The use of dialects in Italy represents a unique situation compared to the rest of Europe. Even today in many different parts of Italy dialects are used as an informal way of communicating in different social settings and within families.

Contrary to popular belief, in certain Italian regions dialects are widely used, and not only within the older generations. Even though the use of standard Italian prevails in the younger generations, many young people can express themselves in their own dialect, or at least understand it, in informal social situations.

It is also worth remembering that dialects, as well as accents, can change a lot even within the same region.

If you take Tuscany as an example, even though there aren’t real and proper dialects, the Florentine accent greatly differs from that of Pisa or Livorno and that of Lucca or Arezzo.

In other regions, it is easy to spot dialectal differences between places in the same Province, or every those just a few kilometers away from each other.

For a long time, dialects have been incorrectly considered the “poor and impoverished parents” of standard Italian, which has mainly developed from the Tuscan dialect. Yet, in reality, dialects represent cultural richness.

This can be seen in the fact that in the last 50 years many regional terms, from Tuscany, Lombardy, Veneto, Naples, and Sicily, have entered the national language. As such, it isn’t surprising that dialects have been heavily studied by linguists and have been used in literature and poetry.

In the past, there was a prejudice towards dialects, with people thinking that standard Italian was the language used by the bourgeoise, while dialects were used by farmers and the working class, yet now this prejudice has mostly died out. For example, recent statistics have revealed that in Veneto, which is one of the most economically developed regions, around half of the population speak in dialect both with their families and with friends.

All you need to do is walk around one of the beautiful and historic cities of Veneto like Venice, Padua, Treviso, Verona, or Vicenza to realize just how present dialects are in urban centers. 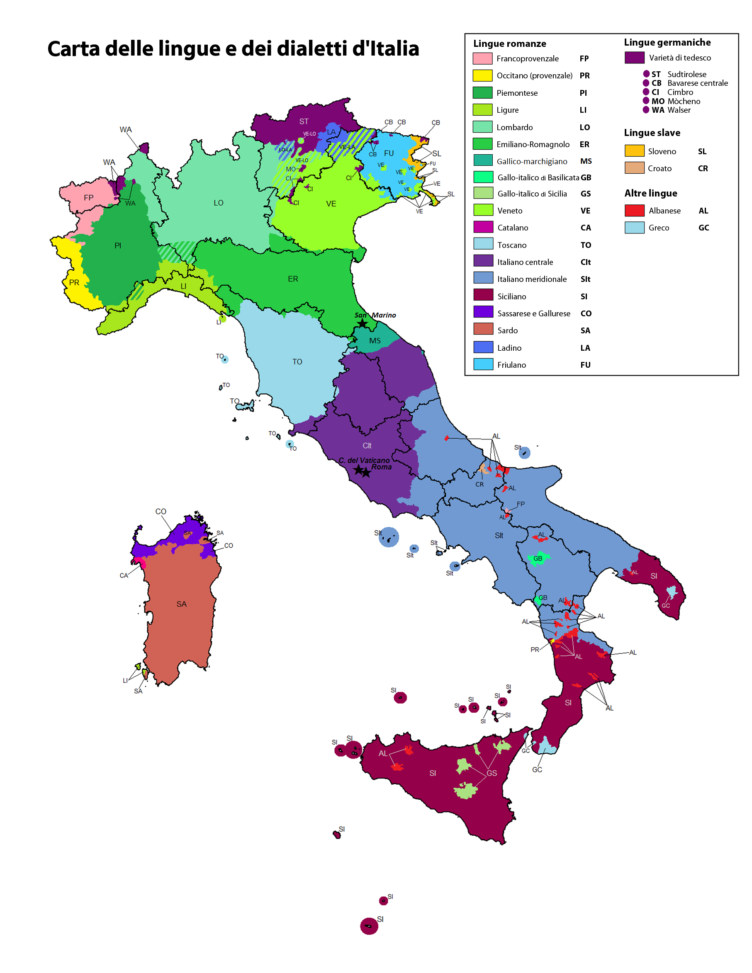 The spreading of standard Italian

In 1950, just as the country was going through a time of complete infrastructural, economic, social, and political reconstruction, less than 20% of the Italian population spoke Italian fluently in their day to day to life.

Illiteracy and semi-illiteracy were largely present in various groups of the population. The Italian Constitution, which was established in 1948, gave everyone the right to basic education.

Yet in certain situations, this right to education was not completely guaranteed. Access to higher education and the university was pretty much only reserved for children from more affluent families, while children from working-class and farming families ended up just being an economic resource for the family.

This meant that many children didn’t even finish primary school, even though the law demanded they stay in school until they were 18 or 20, before taking part in compulsory military service.

Perhaps rather strangely, the event which had the biggest impact in kickstarting the unification of the language was the introduction of television.

TV programs began to be broadcast by RAI, the state broadcaster, in 1954 on just one channel. In the years that followed, up until the economic boom between 1958 and 1962, television did not just become a way to bring people together (as very few people actually had a TV set), but also a way to broadcast cultural programs and linguistic models.

In fact, between 1960 and 1968 RAI broadcast a show in the late afternoon which was called Non è mai troppo tardi, or “It’s never too late,” which was presented by the teacher Alberto Manzi. As a result of this show, many illiterate people learned to read and write, and it is estimated that in this period around one and a half million Italians managed to get their certificate of primary education.

And so, the spreading of a standardized Italian language was aided by economic growth, a better quality of life, the gradual spread of education and linguistic programs shown on TV.

While, on one hand, television state broadcasting had an educational function, or at least in the first 20 years of its existence, it has also had other effects.

Since the 1980s, as television has become more commercially successful, shows have become more about just entertainment and are more trivial, and sometimes vulgar and ordinary and show behaviors far removed from reality.

With the passing of time, this has had a negative effect on the cultural education of the younger generations, and has introduced a much simpler language, full of slang but lacking in words and syntax, and even just incorrect. In other words, a form of “linguistic populism” designed to attract young people and the mass of people lacking a complete cultural education.

The impoverishment of the language

Italian is a language rich with vocabulary, idiomatic expressions, and semantic nuances. In fact, the most complete dictionaries can contain from 80,000 to 250,000 entries.

Research carried out a few years before the death of the famous Italian linguist Tullio De Mauro (1932-2017) confirmed that, in everyday conversation, around half of the population only uses 3000 words.

Furthermore, similar research confirmed that in certain groups of the population (and not necessarily the most disadvantaged), the use of certain fundamental grammatical aspects, like the subjunctive, is incorrect or sometimes just completely left out and ignored. Thanks to a state decree in 2007, the age until which school attendance is compulsory was lifted from 14 to 16. This means that students now have to complete at least 10 years of education, made up of 5 years of primary school, 3 years of middle school, and then 2 years of high school.

So, it is the job of schools, as well as families, to provide an adequate cultural and linguistic education for children.

However, in some cases this does not happen, or at least doesn’t happen completely, due to several different factors: schools and lessons aren’t exciting or up to date, which means that students can’t develop critical thinking skills; the growing invasion of technology, like smartphones, tablets, and social media; the small number of students who read; a writing ability which is less refined or is more under threat due to the other aforementioned reasons.

As a result, in certain scientific faculties of Universities, written Italian tests have been introduced to test the abilities of students. The Accademia della Crusca (the Italian linguistic academy), which is based in the Medici Villa of Castello in Firenze, is the body in charge of checking and registering every linguistic phenomenon and change. 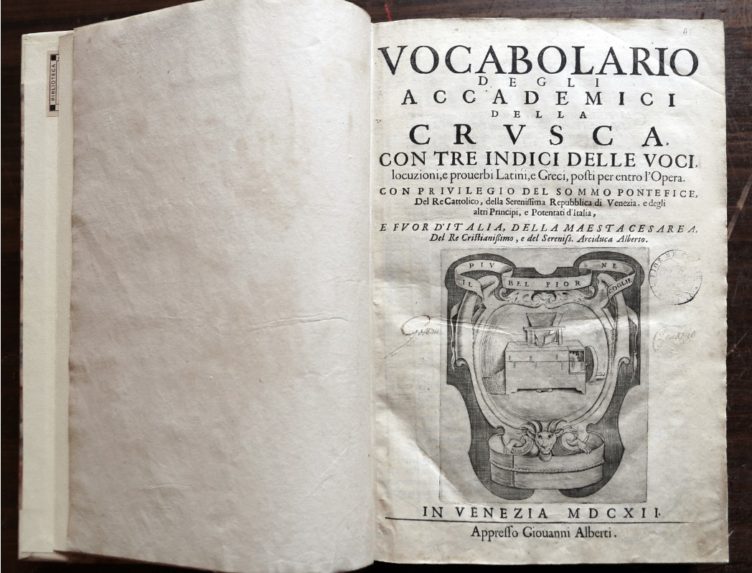 Since the birth of the Republic in 1946, the Italian language has become rich in foreign terms.

Even in the years before the Italian language was invaded by French words in the world of fashion, English in sport and German in philosophy and psychoanalysis.

The Fascist regime aimed to get rid of all these foreign “contaminations” and control the Italian language. To see the effect of this you only need to think about Italian’s national sport. Football was introduced in Italy towards the end of the 1800s by a few Englishmen, with some English terms along with it, which were consequently removed and changed under the Fascist regime.

For example, the goal became rete, penalty became calcio di rigore, offside became fuorigioco and corner became calcio d’angolo. In 1934 and 1938 Italy won the World Cup in two consecutive competitions, which only helped to grow the ridiculous national pride of the fascists.

Sometimes this nationalization of language became slightly exaggerated, for example in the Italian dubbings of Hollywood films. Scarlett O’Hara in Gone with the Wind became the very Italian Rossella.

After the war and until the 1970s French was the first foreign language taught in public schools, although at the same time English was taking off through music and culture. Obviously, in Italy over the last 40 years, English has become the main language taught and has a more and more prevalent role in certain professional sectors (tourism, IT, business, public relations, etc.).

The influence of English sometimes ends up producing contradictions, as day-to-day language often tends to replace a normal Italian word with an English alternative. To take a typical example, Italians often say “Andiamo a fare shopping” (let’s go shopping), instead of using the Italian word spese or acquisti.

Italian as a language of culture abroad

Spoken only in Canton Ticino in Switzerland and in a few communities of Istria (between Slovenia and Croatia), for almost 40 years Italian interests people of every age from all over the world. This has led to the birth of numerous Italian language schools in Italy and the creation of many courses abroad, in Universities, language schools, and also the Italian Institute of Culture.

The main motivation which leads many foreigners to choose Italian is a love for the country and its culture.