Who was Dante Alighieri?

Father of the Italian language

How much do you think you know about Dante?  Do you remember if he was a black Guelph or a white Guelph? Do you know why he is considered the father of the Italian language?

Dante is to Italy what Shakespeare is to the English, what Cervantes is to the Spanish and what Goethe is to the Germans, but maybe he is also something more.

The life of Dante – writer and politician (white Guelph)

Dante was born in Florence in 1265 and died in Ravenna while he was in exile (far from his city of birth).

Dante wasn’t only a literary person and a writer; he was also a politician who played an important role in Florence during his lifetime.

As a matter of fact, he participated in the town council of the city of Florence and was elected as a “priore” (in other words representative) of the powerful medieval association of doctors and pharmacists.

At that time, major labor organizations actively participated in the government of the city, also to limit the influence of the most powerful families – some of them of noble origin – on the social and political life of Florence. 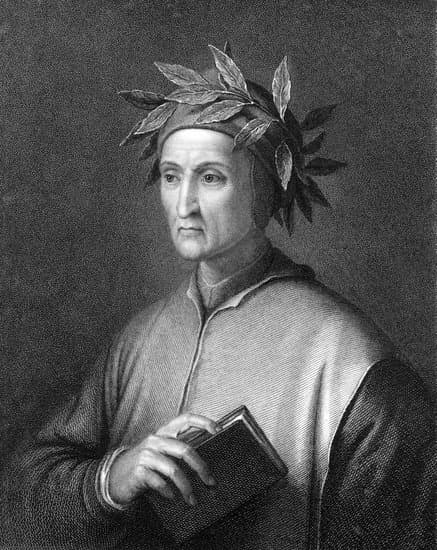 Sentenced to death at the stake

In 1301, when the black Guelph political party (radical supporters of the pope e church) came to power, Dante, who was a member of the white Guelph political party and against Pope Boniface VIII because of his interference in political life and his connections with the most economically influential families, was sentenced to death.

The latter was headed by the Black Guelph party.

The condemnation at the stake announced in Dante’s absence was issued on the basis of accusations which were mostly false and cleverly fabricated about him.  The accusations included fraud, extortion, corruption, and even sodomy with a young boy.

As was customary, at the time, whenever a political opponent was banished from the city or sentenced to death, like others, the Alighieri family home – located right in the heart of the historic center – was demolished.

Destroying the houses of political enemies meant symbolically erasing their memory and all traces of their presence in the city.

By the way, useful information for anyone wishing to visit Florence: the Casa di Dante (Dante’s house), reported in many tourist guides, is a museum that faithfully documents the history of Florence in the thirteenth and fourteenth centuries.

The building is a medieval-style reconstruction completed at the beginning of the twentieth century. It is located more or less in the same area where the Alighieri family’s house stood, a few steps from the church of Santa Margherita dei Cerchi, which Dante himself used to frequent.

To avoid his death sentence, Dante spent the last twenty years of his life in painful exile (mostly in northern Italy), more precisely between Romagna and Veneto, staying from time to time in Forlì, Verona, Padua, Treviso and finally in Ravenna under the protection of the ruling families of those cities.

In the Divine Comedy, precisely in canto XVII of Paradise, Dante makes an explicit reference to his condition of exile through the words of his ancestor Cacciaguida: “You will try the bread of others as it tastes of salt …”.

This phrase also recalls a custom of the daily life of that time.

At that time, bread in Florence was made without salt, as indeed today, while in the rest of Italy bread was salted.

This was due to the difficulty of political relations and frequent conflicts with Pisa, the powerful maritime republic that held a monopoly on salt production.

Therefore, metaphorically the bread eaten by Dante while he was in exile had an excessively salty, almost bitter taste: bitter as his distance from his beloved Florence.

Dante died in 1321 in Ravenna, where his body is still located inside a mausoleum.

Dante’s tomb which we can see inside the church of Santa Croce in Florence is actually a cenotaph or an empty tomb.

In other words, only a celebratory monument to the supreme poet. 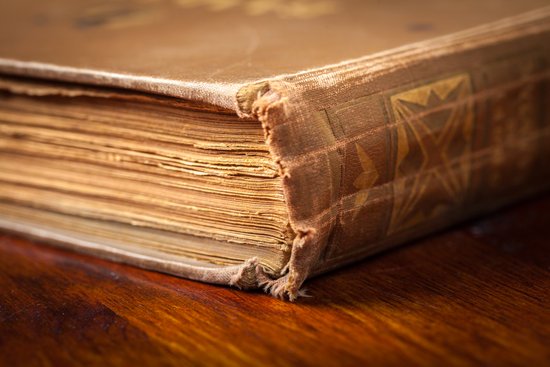 As is universally known, Dante’s greatness is recognized most of all by his literary work, and in particular by his most famous poem, the Divine Comedy

According to reliable sources, the original title was probably Comedia (Comedy), with an accent on the i.

After the Divine Comedy, everything changed.

The Divine Comedy was an incredible success and in the 14th century it was a bestseller. 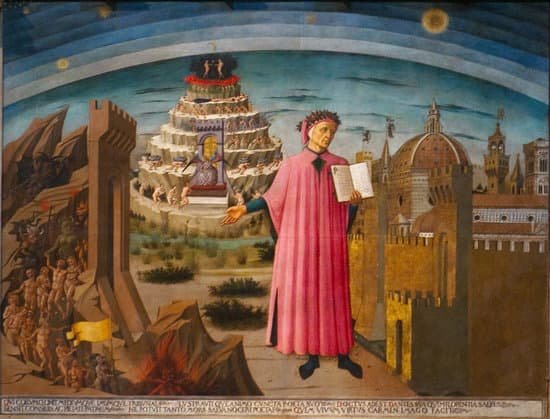 The Comedy spoke of an imaginary journey made by Dante himself into the afterlife, under the guidance of the Latin poet Virgil.

In the afterlife, Dante meets the most important characters in history and those who lived during his lifetime.

The journey is divided into three different places in the afterlife according to Christianity.

Hell, where those sinners condemned to eternal damnation were sent to atone for their sins forever.

Purgatory, where those who committed minor sins awaited for a certain time to purify their souls before finally entering Heaven: here Dante met his beloved Beatrice.

Somehow Dante invents what will be the collective imagination of the afterlife in the West. Through his brilliant intuition and in this poem, Dante speaks of the most important aspects of the society of his time: politics, religion, philosophy, and economics.

Especially in some of the sections of Inferno Dante represents and fiercely criticizes some characters from the Florentine and Tuscan political scene.

Even in the following centuries, the Divine Comedy was read by many people throughout Italy.

It is still an integral and fundamental part of language and literature programs at school.

Its greatness is not only in the contents, but above all in the form, for the beautiful quality of the poetics, for its extraordinary rhymes, but above all, because Dante did something absolutely revolutionary.

Dante wrote the Divine Comedy in the vernacular.

What does “vulgar” (vernacular) mean? Between 1200 and 1300 Italy was a nation divided into many small city-states and in each of these cities different dialects were spoken which were called the “vulgar (vernacular) languages”, that is the languages ​​commonly spoken by the population (from the Latin vulgus, “people”).

In fact, in daily practice, everything was always written in Latin and the vernacular was used to write down things of little importance.

In regards to the use of the vernacular, Dante had dedicated an essay written in Latin between 1303 and 1305, on eloquence in the vernacular.

Dante developed on a large scale and brought to fruition the trends that had already begun. 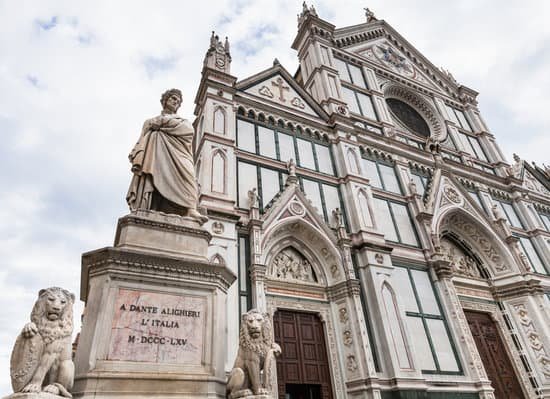 Dante himself was part of a poetic movement, the Dolce Stil Novo, founded by Guido Guinizzelli.

Its members used the vernacular for their poetic compositions.

Moreover, a few decades earlier in Sicily, at the court of Frederick II, Holly Roman Empire, a discussion group of poets had formed who wrote Sicilian vernacular verses.

In the Divine Comedy, Dante completely changes the rules of the game: he is in fact the first poet to write a work of such great scale and dimension not in Latin, but in Florentine vernacular.

This pleased him very much.

Dante revolutionized literature and from that moment on all the most attentive writers, such as Francesco Petrarch and Giovanni Boccaccio, began writing in the dialect of Florence, in the Florentine vernacular which becomes not only the most popular dialect in Italy, but also the most famous and the most prestigious.

So much so that in the rest of Italy speaking Florentine was considered a sign of great refinement. 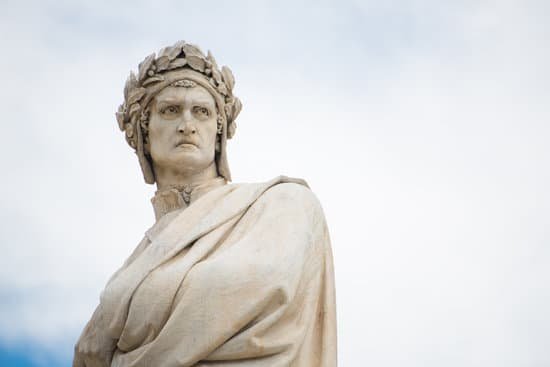 Beginning in the 17th century, people began discussing which language to speak and which forms to use.

When Italy became a united nation in 1861, a single national language had to be chosen.

The choice was made. The language used by Dante, the great poet, won out.

The difficulty with replacing Italian dialects with standard Italian

However, in both rural areas and in the working and middle classes residing in urban areas, mainly regional dialects continued to be used and this trend would continue for several decades.

After the Second World War in Italy the majority of the population still spoke dialects as their language ​​for everyday social communication.

Especially in the lower strata of the population, where the level of education was lacking and where there was still a very high rate of illiteracy.

Having a good level of education was considered a privilege which was reserved for a very few; secondary school and especially university were mainly attended by children of the middle and upper classes.

The uniformity of Italian begins in the 1960s

The use of standard Italian (which most Italians speak today) has spread over the past seventy years by virtue of increased access to schooling and thanks to television, which especially in the sixties proposed uniform syntax and pronunciation criteria, and the creation of useful educational programs which included adult literacy courses.

So, what conclusion can we draw from all this?

Basically, through a long and complex evolutionary process that lasted more than six centuries, the Florentine language (spoken and written by Dante) was (and remains) the basis of the Italian language that you all desire to learn to speak: so how could this not be important?

2 thoughts on “Dante Alighieri (the Supreme Poet): Life and The Divine Comedy”